At 2.14pm on Sunday 18th December 2016, the Bureau of Meteorology issued a severe thunderstorm warning for very dangerous thunderstorms with destructive winds and large hailstones.

As the storm hit Energex recorded 36,000 lightning strikes and 10,000 southeast Queensland homes and businesses were left without power.

The SES received 144 calls for assistance in Ipswich and 41 in Brisbane, Logan and the Scenic Rim.

A home in The Gap had its roof blown off, a supermarket in Bellbowrie sustained a partial roof collapse and in Wynnum a shop front fell on an unoccupied car.

Many homes across the region sustained hail and impact damage from falling trees.

Ipswich received the heaviest rainfall, with 55 millimetres falling in 30 mins, while winds in excess of 100 kilometres per hour were recorded at Amberley Airport and Brisbane’s western suburbs. 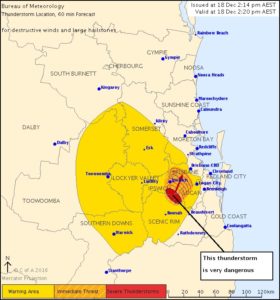