What can you say when you walk into an Assessment and see this?  Mushrooms in the carpet! 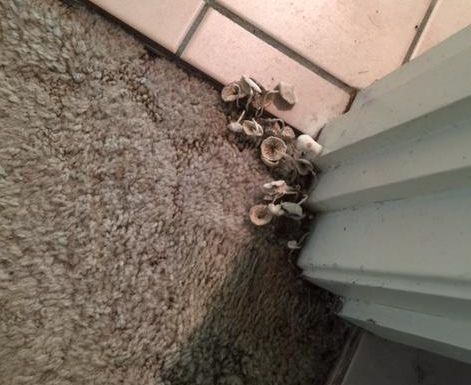 When mushrooms start growing inside your home it is a little hard to argue you were not aware of the moisture problem.

Mould and fungi will take root on almost any surface when there is moisture and a food source present.  Mushrooms are fungi that require oxygen, a food source, suitable temperature and a source of water to thrive.

While fungal spores that generate mushrooms are microscopic and light enough to be carried by the wind, on clothing or on shoes, for a mushroom to grow two of the single cell spores must combine.

Mushrooms generally require high humidity and low light to grow.  Therefore when mushrooms such as the ones shown above are located, the substrate needs to be carefully inspected for structural damage as it is an indicator of high levels of moisture being present over an extended period of time.

The real danger of mushrooms growing inside the house is they are a sign of a significant moisture problem that could support the more harmful growth of black mould.

By simply having fresh air and sunlight in the home, humidity is reduced and the surface is able to dry naturally if there is a source of moisture present.

Without these elements fungi can thrive and while mushrooms in bathrooms and basements are more common because of these reasons, mushrooms growing out of carpet is a big red flag!

Simply treating the mushrooms with a fungicide in this situation is not enough to prevent future fungal problems.  Rather, like all moulds and fungi, the cause of the moisture must be identified, treated and the moisture removed,before the area is treated.

In this instance the source of the moisture was from several sources.  Missing grout in the shower cubicle, lack of sealant around the tap spindles to provide a waterproof seal, a leaking pipe in the wall and a failure in the laundry taps.  All of these elements combined to provide sufficient moisture to support the growth of the mushrooms inside the house.