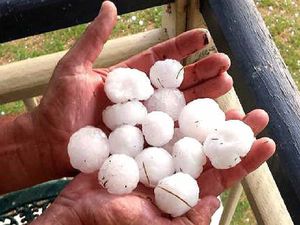 What causes a thunderstorm to become a hailstorm?

“You really need what is called a ‘sustained updraft'”.

“You need the air to be rapidly moving up in the atmosphere.”

Ms Slattery explained that as warm air rushes up, moisture is lifted and pushed into cooler parts of the atmosphere.

When the updraft intensifies, the moisture becomes caught in a cyclic, tumbling wind pattern.

And when the lift created from the updraft is strong enough to keep the moisture aloft, hail begins to form. 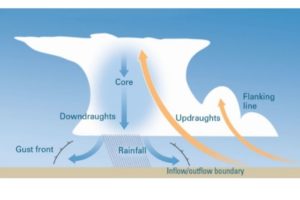 If the updraft is strong enough, small stones will continue to be tossed upwards and grow until they become large enough for to gravity pull them down.

“[The hail] just does this big circle and keeps growing and growing,” Ms Slattery said.

Misshaped hail stones are caused when stones collide during the cycle of formation.

The moisture available below the storm and the speed of the updraft determines the size of hail stones.

A thunderstorm is associated with a very tall cloud mass, a cumulonimbus cloud, that has a flat, dark base from which heavy rain and hail can fall. When not obscured by haze or other clouds, the top of a cumulonimbus is bright and tall, reaching up to an altitude of 10-16 km (lower in higher latitudes and higher in the tropics). The top may appear to be ‘boiling’ with cauliflower-shaped lumps but more often has a fibrous, frozen appearance.

Although a thunderstorm is a three-dimensional structure, it should be thought of as a constantly evolving process rather than an object. Each thunderstorm, or cluster of thunderstorms, is a self-contained system with organised regions of updraughts (upward moving air) and downdraughts (downward moving air). Their movement within the cloud and interaction with prevailing winds at various heights in the atmosphere form changing cloud features that you can see and interpret. The whole process is an example of convection, which acts to distribute energy more evenly in the atmosphere.

Every thunderstorm cloud has:

The core is that part of the cloud where sustained strong updraughts of relatively warm and moist air condense to produce rain, hail and/or snow (collectively known as precipitation) and associated downdraughts. Underneath the core we see a rain curtain, whilst above it the tallest part of the thunderstorm can be found. The dark flat cloud base that extends away from the core (usually to the west or north) is called the flanking line or rain-free base, along which air fuelling updraughts into the thunderstorm rises in successive cumulus towers.